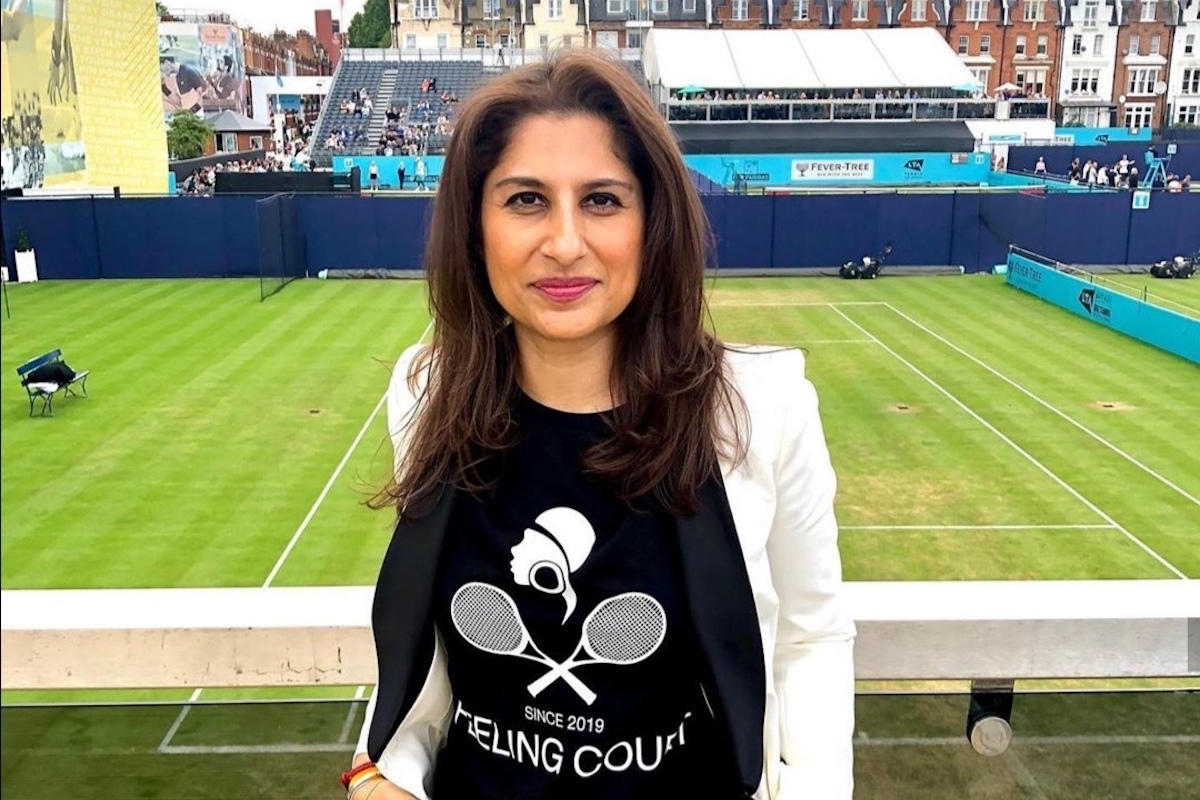 Tell us a little more about you Amisha!……

Where are you from, where do you currently live ?

I’m born and bred in London.

Where did your love for tennis come from?

My passion for tennis started from childhood. As an infant I recall my dad taking me to a squash court nearby where I used to watch people playing squash and then keep those little balls afterwards. Growing up, I would come home from school during the London summer to Wimbledon on tv. My mum was a fan, having played badminton in her childhood. For me, Wimbledon was love at first sight. The impeccably manicured green Centre Court, the all white dress code, the tradition, the history, the glory. The familiar thwack of the ball & “quiet please” from the umpire. And the glamour! Players like Steffi Graf, Martina Navratilova, Andre Agassi, Bjon Borg – I would try to emulate their styles by hitting against the wall, playing in the garden and then my local court. I still have my first ‘real’ tennis racquet – the Dunlop Max 200g!

What is your favorite tournament and why?

It has to be Wimbledon for the reasons I mention above. I have grown up with it.  My very first visit was at the age of 10. That was the precursor to what has now become an annual fortnightly obsession. For me, Wimbledon heralded the start of my summer and happy days playing tennis in the sunshine, whether on a court or hitting against a wall outside. The Wimbledon fortnight is a fixture in my diary booked a year in advance. It is non-negotiable!

Which professional player you have met gave you the best impression or did it produce a great Feeling?

I’ve been fortunate enough to have met a few professional players over the years. A highlight Was meeting one of my hero’s, Venus Williams. I met Venus in 2016. She has as much charisma and personality off court as she does on court. Having followed and admired the Williams’ sisters tennis journey over the years, it was a true superstar – fan moment to meet her. They say you should never meet your heroes. But Venus exceeded my expectations. Venus and Serena have fought adversity both on and off court to become tennis royalty that have stood the test of time. Nobody plays like Venus. A baseline player with a fiercely attacking all-Court game. She and Serena have raised the bar in women’s tennis. Never has women’s tennis been more physical, powerful and exciting than it is during their reign. The serve, the drive volley are shots an amateur like myself can only dream of. I told Venus at our meeting that The WTA is all the more exiting because of her, and that I keep trying to hit my drive volleys like her! She thanked me in that sweet softly spoken voice, with a smile that lit the room.  Her friend Val offered to take a photo of us both which was very kind. As it was a few days before the start of Wimbledon, I wished her good luck and said “Go Venus, go! Go get ‘em!” To which she giggled and thanked me before we said goodbye.

What experience do you always have in your head? In. A tennis tournament and what tournament. It was?

In terms of participation, the closest I’ve got to feeling like a profession on tour is when I played an amateurs LTA tournament at the prestigious Queens Club. The experience was memorable but the score wasn’t, as I got beaten and almost ‘bagelled’ by my opponent with a 6-0 6-1 score.

What opinion do you have of the. Mark feeling court?

I am truly proud and honoured to be a brand ambassador. Feeling Court apparel and accessories look good both on and off court. And are made with the best quality. For me, it’s also about the ethos of the brand that makes me proud to showcase it. Manuel Acuna has created this brand with a positive mission. Each year, he travels to impoverished regions in Kenya to donate tennis equipment to orphanages and schools, and to dedicate his own time teaching children how to play tennis, many who have never played tennis in their lives. All this through his personal mission. So for me, it’s a brand I believe in, as some of the profits truly go towards a good cause.

A male tennis player? Rafa Nadal!  The power, the fierceness, the dedication.

A female tennis player? Serena Williams. Power and grace built into one superpower who has defied the odds and continues to do so.

A coach? Patrick Mouratoglu. Not only for the players he creates but for the fact that everyone at his academy always look happy to be there and that’s always a good sign. Patrick’s autobiography is so insightful, and he’s always been very gracious when I’ve met him at tournaments.

A tennis club? The All England Lawn Tennis Club or Monte Carlo Country Club- just for the surroundings!

A city? Mine of course – London.

A dream? To play on Centre Court .

Tennis player of the past that you would like to know? Steffi Graf.

Your next trip? Would have to be where there is the next tennis match after quarantine is over and we are all allowed to travel!